The World Cup is back! This means that summer is officially here and for the next month, whether you like it or not, you are about to hear a lot of conversations about football.  Even if you don’t really like ‘the beautiful game‘, now is the time to embrace it. If your team usually leave the competition early (something England fans are used to), try choosing an obscure team to follow and that can keep the tournament exciting. For example, Iceland, who surprised everyone during the 2016 Euro Cup by getting through to the quarter-finals. They are now the smallest populated country to ever qualify for a World Cup, and they could make for a fun team to support.

So, if you’re going to be talking a lot about countries and football teams, now is a good time to refresh your country nouns and adjectives. Each country has a noun (for example: Spain), an adjective form (Spanish), and also a noun to refer to a person from that country (Spaniard).  Often, the adjective form is the same word to refer to someone from that country (German, a German). Here are the country nouns, adjectives and person nouns for the teams that have qualified for the 2018 World Cup: 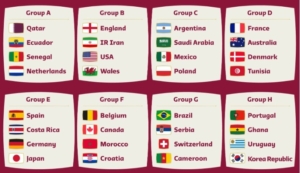 Normally, you just use the country noun to refer to the team, for example: ‘tonight it is France vs. Germany’. However, if you use the word ‘team’ then you need to describe which team you are talking about, so you use the nationality adjective: ‘the English team are the youngest team in the tournament’.

You´ll notice that most nationality adjective endings in the English language are one of the following:

However there are some irregular nationality adjectives such as: Dutch, French, Welsh, and Swiss.

Can you think of anymore?

Away from football, we also use nationality adjectives to describe the culture (art, music), food and language from that country. For example, ‘Japanese art is very popular at the moment.  Spanish food is delicious. I’m trying to learn Polish, but it is very difficult’.

Lastly, and hopefully something you’ve noticed while reading this article, it’s important to always remember that in English we use a capital letter whenever we write a country or nationality adjective.

Hi! Welcome to GNP. Leave us a message or your contact number and we´ll contact you ASAP. Thanks!